From his childhood, Samson had a secret.  His birth was heralded by an angel (in fact many speculate that the messenger of Samson’s birth was an appearance of Jesus) who had promised that God would use Samson to begin to deliver Israel.  Samson’s role in the sovereign calling was simple: he was to be a Nazarite unto God.  A Nazarite was not a priest, but was a person who was specially dedicated to the Lord (sort of like a monk, or Nun that has made a special dedication of himself to the God).

The length of his hair became the sign of his consecration to God.  His simple obedience was the secret of God’s power in Samson’s life.

In Judges 14:1-3 Samson initiates a plan, at the offset, his plan seems very simple, and normal: get married.  Samson is attracted to a Philistine woman, which was certainly unconventional, but he was led by the Spirit of God in his choice (v. 4a).  Although Samson’s attraction was initiated by God, from the outside it appeared to be a carnal intent.  The natural man would assume (as Samson’s parents assumed) that the intents of Samson’s young inexperienced heart, or his flesh, were the motives of his desire.  But the thing was from the Lord; it impossible to discern the motives and intentions of the Holy Spirit (1 Cor 2:10 & 11).

Not even Samson could have understood why he was compelled to pursue the Philistine woman – he could not have known the mind of the Spirit.  Rather, as the Master declared: The wind bloweth where it listeth, and thou hearest the sound thereof, but canst not tell whence it cometh, and whither it goeth: so is every one that is born of the Spirit.  (John 3:8)  Certainly, this is no example to say we ought to follow our compulsions, and impulses – Samson was following the spiritual promptings of the Lord (THAT is what we ought to emulate).

Samson’s parents were conventionally opposed to the idea of him marrying a Philistine woman, but as Samson could not be dissuaded (as we ought not be dissuaded when we discover the will of God), they agreed to meet the girl and her family.

Judges 14:5-7
Then went Samson down, and his father and his mother, to Timnath, and came to the vineyards of Timnath: and, behold, a young lion roared against him.

And the Spirit of the LORD came mightily upon him, and he rent him as he would have rent a kid, and he had nothing in his hand: but he told not his father or his mother what he had done.

And he went down, and talked with the woman; and she pleased Samson well.

Now, Samson had to persuade his parents to consider letting him marry a Philistine, but here, Samson meets his first real opposition which came in response – have no doubt – to his CONSECRATED PURPOSE.

Samson, however, was undaunted.  The task he had set out to was from the Lord, and no weapon formed against him could prevail.  Lest we miss the parallel – the lion spiritually represents the personified opposition to the anointing.

1 Peter 5:8-9
Be sober, be vigilant; because your adversary the devil, as a roaring lion, walketh about, seeking whom he may devour: 9 Whom resist stedfast in the faith… 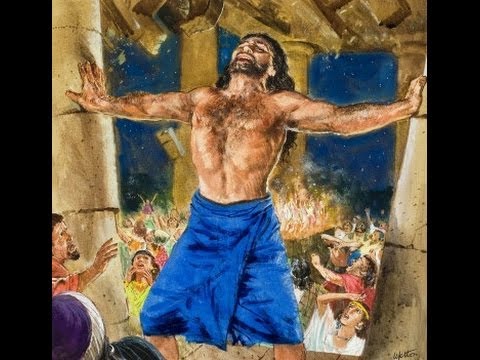 Let’s get a little more parralell, then, and look at this:

When Jesus came in the flesh, He came to reclaim His sinful bride; He was compelled by the Spirit to pursue a ‘Philistine woman’.  His first opposition following His consecration (The Sign of Water Baptism) was the devil striking at a personal level (Matt 4:1); His final victory was after affliction, dying on the cross to bring down the kingdom of darkness.

Led by the Spirit of God – Samson was a foreshadow of Christ.

Like in Christ’s final victory: Samson rent the lion, and went down and communed with the woman, and she pleased him well.  ‘…for the joy that was set before Him, He endured the cross, despising the shame…’ (Hebrews 12:2) – the joy which Christ sought was the church: His bride.

Those who would follow Christ will face opposition (and get the victory) – this is the first fundamental revelation at the basis of Samson’s riddle.

I suppose I will stop here for the day, and turn this into a series (for those willing to follow).