This is actually from a post I wrote back during the presidential race which concluded with Donald Trump’s current presidency with the featured image (I’m still sort of proud of (although that’s actually John Knox, not Calvin)): 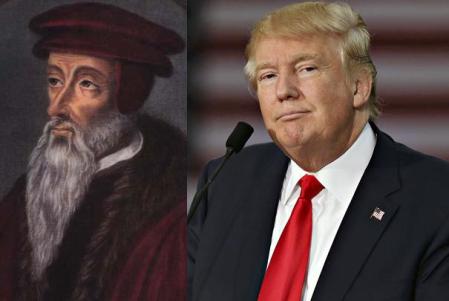 Just read a post about our presidential race, wherein the thought was posed that God is ‘allowing America’ to have the president it ‘deserves’ (that stated with the negative connotation toward the prospect of Mr. Trump as our president).

Will I weigh in on the politics here?  Well, I will start with the theology of the statement (though my political ideals may bleed out a bit as we go).

I don’t want to sound negative or cynical here, but I have to disagree with the thesis laid forth.  The first thing I will look at is the concept of what God ‘allows’  I feel sorry for God here, because it seems that we assume He is allowing an awful lot of bad things (in general – again, here I will try not to weigh in too heavily on my political preferences).

There are many atrocities taking place in the world today that are because of man’s sinfulness.  God ‘allows this,’ we are told, but… does He?

I know that if God were present, sin would be absent – yes sin and iniquity are done away in the presence of God, because God is holy – He does not ALLOW evil.

Consider this perspective of the fall of man:  Adam and Eve walked with God in the garden (surely this was the incarnate Christ, who is the express image of the invisible God for ‘No man has seen God at any time; [but] the only begotten Son, which is in the bosom of the Father, he has declared [or ‘revealed’] Him’).  Yet man was given charge over all that God had made.  God had made Adam the ultimate authority over His creation (Gen Gen 1:26 & 28; Ps. 8).

In putting man over the works of His hands, God did not micromanage the way that Adam did things.  Adam had complete freedom, and there was only one restriction for him on what could be done.

Now bear this in mind: God was not physically present in the garden with Adam and Eve in the moment they fell into sin.  (No doubt we could spend hours discussing the omni-presence of God, but that would be largely beside the point, as far as the physical incarnation of God whom Adam and Eve walked with ‘in the cool of the day’ He was not there).

God had commanded Adam not to eat from the tree – we all know the story.  Now did God ‘allow’ Adam to sin?  (bear in mind that if we say ‘yes’ to that we are actually assigning some degree of blame to God, for surely ‘He could have stepped in at any moment to stop it, but did not,’ right?).

No, I think we have inherited some wrong perspective of what God is ‘responsible’ for.  Were God present in that moment, Adam would not have sinned (nor Eve) – He would not have allowed it.  There is a powerful spiritual lesson in that thought alone, and biblical, for: ‘Where the Spirit of the Lord is, there is liberty.‘ (2 Cor 3:17).  Where God is present, sin does not exist.  This is why no unclean thing was allowed in the temple, this is why  no iniquity will pass through the gates of the New Jerusalem.

[Theological interlude: Yet to justify our view of the ‘absolute sovereignty’ of God, God must have ‘allowed’ Adam to sin for it was ‘predestinated’! Not to delve too deeply into that I will make only a brief rebuttal by consideration of the verse central to that line of thought, which says: ‘Whom He FORKNEW, them He ALSO predestinated…’ (Rom 8:29) that is – all knowing, He KNEW ahead of time who would live by faith (follow the whole context of the book of Romans not just a few extracted verses) and gave them assistance with Pre-planned grace; for Rom 5:2 declares that we have access to this grace (i.e., we can PRESENTLY obtain it) by faith.  (Compare this thought & Rom 5:2 with Rom 9:8-13) For Romans is a book about justification by faith alone, not about God’s predisposition to have wrath on sinners.)]

Continuing the story of Adam, and Eve, we see that after the transgression occurs, God arrives.  What does God do when He comes?  Judgement for sin ensues.  Indeed, Genesis 3:8-21 is a preview of the final, eternal judgment that will occur when Christ returns (side note: notice that the only one not given the opportunity to defend him/herself is the serpent – HALLELUJAH!)

So when God arrives, we find that sin is not tolerated – in fact it must be put out of His presence.  God does not ever, in any wise ‘allow’ sin and evil to occur.  None of the injustice that exists in the world today is caused by my gracious and loving heavenly Father, neither has He ‘allowed’ it.

Another vantage point to consider is Psalm 82.  In Ps 82 (which Jesus quotes in the Gospel of John – calling the righteous ‘gods;’) God stands amidst His children, and charges THEM as to why THEY ALLOW evil!  For: ‘…all the foundations of the earth are out of course.‘  (v.5)

I think that as Christians looking at the political arena, or at situations we feel we have no control over, it is easy (for the sake of our own sense of security) to view that God in His sovereignty has ‘allowed’ things to take place which we do not like, or agree with.

When the Philistines invaded Israel, and the whole Israelite army was pre-determinately defeated, and so thoroughly downtrodden and discouraged that no one in Israel was willing to fight even a one-on-one battle with Goliath. Did David, therefore, assume that: ‘Well, we can’t do anything about it, it must be God’s will that we become slaves to the Philistines’?  No, he knew what the will of God was and for that reason he could have absolute confidence in his victory.

So with us, if a situation seems contrary to the will and intent of God – it probably is.  It is not yet the eternal judgment, we are still in the year of the Lord’s favor, we can be saved from wrath by faith!  What’s more, if we are in the will of God (even if no one else is) we can be sure that He will help us in our weakness.

The reason that I have now written a blog on this wise is because I believe that by our theology, we Christians almost always consign ourselves to situations that are NOT God’s will because we feel we have no control over them.  So rather than to pray and act in opposition to things that are clearly ‘bad,’ or that we feel are contrary to God’s will, we align ourselves with the evil of the situation, assuming it to be God’s intent.  In a roundabout way we are blaming God for the evil that ensues in the earth – just as Adam did in the original sin: ‘…the woman YOU gave me…’

Do I think that Donald Trump (or Hillary for that matter) was ‘predestinated’ to be president?  You bet your boots I don’t.